The National Bureau of Economic Research officially declared the United States in recession as of December 2007. While the consequences of the recession are apparent, animals have also fallen victim to the economic downturn.

With so many people forced to cut corners, local shelters are not faring well. Shelters – most of which are nonprofit and run entirely on donations – are experiencing monumental drops in funding coupled with equally monumental numbers of incoming animals. Additionally, adoption rates have dwindled, creating a dangerous situation for the animals.

Mid Hudson Animal Aid, a private nonprofit organization in Beacon, has cared for and sheltered abused and abandoned cats for over 30 years. Its ability to take care of the cats has been hampered by the recession.

“The past two years have been the worst ever for donations,” said Richard Mikolajczak, treasurer and caretaker at MHAA. “We have to spend about $5,000 to $10,000 more a month than we bring in to properly care for our animals.”

The MHAA must dip into savings every month to stay afloat. According to Mikolajczak, with donations down 30 percent in the past two years and a doubling population, this organization is desperate for not only donations, but for suitable homes as well. Before the recession, the shelter typically adopted 20 to 30 cats per month. This number has subsequently fallen to 12 to 15 per month.

Dismal rates are also being seen at the Dutchess County Society for the Prevention of Cruelty to Animals. The DCSPCA’s facilities are equipped to house 200 cats, but are currently home to 400. The group is also experiencing its lowest donation rates ever — and these numbers are not exclusive to cats.

“Dogs suffer the most because they are so dependent on humans,” said Missy Veraldo, manager of the Blooming Grove Humane Society.

The financial slump people are feeling has led some to rid themselves of the financial burden of their dogs. Surrendering and abandoning pets in and around shelters are at an all-time high. “You really see the extremes of both worlds,” said Leah Hapeman, assistant manager of the DCSPCA. “What people won’t do for animals and what they will do.”

The DCSPCA has found dogs tied to fences, thrown over walls of their pens and left emaciated in dumpsters.

“It really is becoming a throwaway society,” Hapeman said.

Putting economy aside, there are more basic causes for the influx of animals these organizations are experiencing; poor planning and lack of responsibility from owners’ is a major contributor to the problem.

“No one goes bankrupt overnight,” Hapeman said. “If you know that you can’t afford it, start to make the proper arrangements for your animal.”

An effort that can reduce the problem of abandoned and neglected animals is spaying and neutering pets. New litters put a strain on shelters that are already overpopulated. Most shelters sponsor “spay-and-neuter-days.”

According to Hapeman, clearing up common misconceptions about shelters could be a first step to solving this problem. She said many people mistakenly assume that shelters receive state and federal funding.

“People think tax dollars pay for stuff here. They don’t,” said Hapeman while scratching a cat laying on her lap. “People also think that this is where bad animals go. This is where animals go who simply need a home.”

Mon Mar 29 , 2010
Students and professors at SUNY New Paltz flocked to hear the now infamous former Gov. Eliot Spitzer speak about New York’s financial meltdown on March 11. More than 350 students and faculty members attended the event, eager to catch a glimpse of the ex-governor who made headlines after a prostitution […] 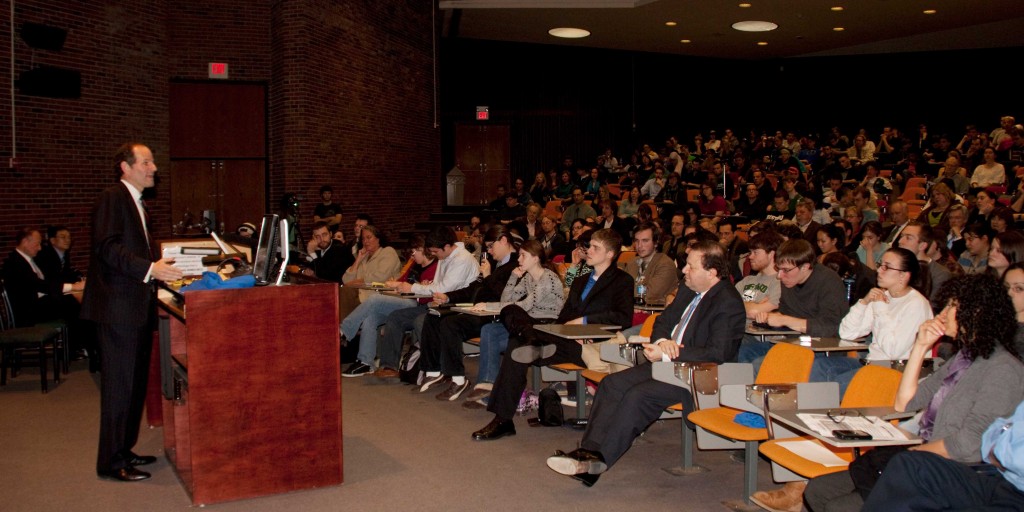