The heat over the stove began to overwhelm Ginger Lopez, a pasta chef in the dining area of the Student Union, as sweat began to form along her brow. The hungry students wipe their foreheads as well, but through it all, Lopez was able to maintain composure and even crack a few jokes.

“Have you ever had pasta anywhere else?” she asked one student, “Because I’m going to ruin it for you once you taste mine.”

Due to her pasta expertise, Lopez is now being honored for her work on campus. Campus Auxiliary Services is presenting her with the “Making a Difference Award” after receiving more votes than any other recipient in its history.

However, Lopez had no idea she won.

“I was stopped in the bookstore and congratulated, but I had no idea why,” she said.

Lopez couldn’t have been more honored to receive the award. She said it was a thank you note from all the hunger-panged students that flow through the dining area every day. She has not only served a hefty portion of pasta to each of them, but has tried to befriend and learn something about every new face.

As the oldest of a family of six, Lopez was no stranger to handling a big workload; she had to cook nightly for her brothers and sisters.

“I always had to pick up the slack,” she said. “I was always making lunch or dinner, which I guess is where I picked up my love of cooking.”

Lopez first made her way to New Paltz in December 1992 while on a trip that drastically changed her life. She was pregnant and came to the Hudson Valley to visit relatives. While visiting, her first son, Benedict, was born on Christmas morning.

Lopez realized how much she liked New Paltz when he was born.

“I remember walking with him, wrapped up in blankets, to New Paltz Gardens,” she said, “It was snowing out, and it was so beautiful, I really fell in love with the town that night.”

Students say her love for the town and her cheerful demeanor are the first qualities they notice about Lopez. In an effort to be dedicated to her job, she arrives over hour early every day.

Ginger was recently pictured in Campus Dining Digest for presenting SUNY New Paltz as a “role model for other campuses.” This was the first time New Paltz has ever been featured in the magazine’s 30-year history.

Lopez, now a mother of two, isn’t the only member in her family with cooking prowess. Her daughter is extremely interested in culinary arts, and will soon be attending New Paltz. She will be working in the SUB alongside her mother. However, Lopez has big dreams ahead.

“I have a five-year plan,” she said. “My daughter and I are going to open up our own coffee shops, maybe in Canada.”

The shop would be called The Chronicles, a news themed café where people could stop and grab a newspaper along with their cup of coffee. Despite her gung-ho attitude towards starting the business, Lopez finds it hard to leave the place she has called home for so long.

“It’s one of those towns where everyone knows everyone else,” she said. “It’s a great feeling, so many people come up to me gingerly and friendly, maybe it’s my name.”

Big Brother is Watching: Watch Back

Wed Mar 10 , 2010
There are so many other things going on in life, like school, work or what’s going to happen next on “Lost.” Who has time to listen to a bunch of bloated politicians when you’ve got papers due and bills to pay? Who needs to pay attention to state government? We […] 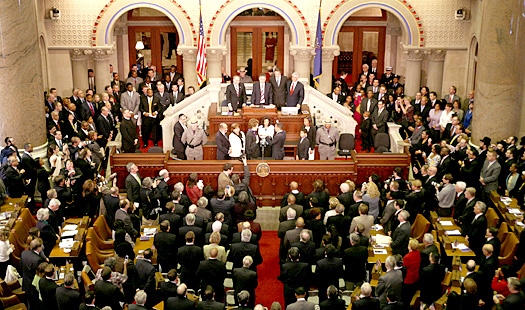