There are so many other things going on in life, like school, work or what’s going to happen next on “Lost.” Who has time to listen to a bunch of bloated politicians when you’ve got papers due and bills to pay? Who needs to pay attention to state government? We do.

The politicians that make up The New York State Legislature affect almost every aspect of our lives, especially students at any SUNY school. These people control our tax and tuition rates.

Here’s a quick quiz to see how informed, or uninformed, you may be about our state government.

1: Do you know who New York’s governor is? (Bonus points if you know how he got to be governor.)

2: Do you know who your state senator is? (Any out of state students can answer with the senator who represents the New Paltz area.)

3: Do you know who your state assembly member is? (For the out-of-state folks, same as above.)

How did you do? I’ll give you the answers. New York’s governor is David A. Paterson, who replaced former governor Eliot Spitzer after Spitzer was involved in a prostitution scandal in 2008. For all of those out-of-state players, New Paltz’s senator is John J. Boniac and its assembly member is Kevin A. Cahill.

It is important for state residents to know who these officials are. Simply put, if you know your representatives, you know who to complain to about the issues that matter to you the most. For example, the vote last December to legalize gay marriage failed 38-24.

Did you know that eight of those nay votes were democrats? Capitol Confidential, a blog from the Albany’s Times Union, reported the votes instantaneously. Following a blog like this allows anyone in New York to know where their representatives stand and if they are properly representing their residents.

Another example is the proposed Public High Education Empowerment and Innovation Act. Essentially, Gov. Paterson wants to relinquish the Legislature’s power over SUNY schools to SUNY. This would mean no more legislative process regarding how tuition is increased.

There is another aspect to state politics that’s worth paying attention to. Picture this: a heated argument breaks out among a group of democratic senators as they decide the political fate of a colleague as a female senator talks about working with republicans to expel their wayward cohort. Suddenly, another senator jumps up and begins to curse and shout against the woman’s idea. A third senator jumps up to defend the woman and the two men come to blows over the situation.

Sounds like a tense part of a movie, but it’s not. Ken Lovett of the New York Post reported this story on Feb. 11. Sen. Diane Savino was allegedly charged at by Sen. Kevin Parker when she brought up the subject of reaching across the aisle to republicans. Sen. Jeffery Klein jumped up to defend Savino and was nearly forced to physically fight Parker, according to Post.

People pay money to see that kind of drama in movies and citizens of New York are lucky enough to have it happen for free within our state Senate.

Where does one find these stories? Capitol Confidential focuses exclusively on New York politics. The New York Post also has a solid blog, The Daily Politics. Both of these provide instant coverage of daily occurrences within the state Senate.

Another resource to look to is the Legislative Gazette. The paper was created by a SUNY New Paltz student during the 1970’s and focuses entirely on New York politics and government. It is available to read online and has a blog that provides daily updates on the Senate and Assembly action.

From the words of Thomas Jefferson, “I know of no safe repository of the ultimate power of society but people. And if we think them not enlightened enough, the remedy is not to take the power from them, but to inform them by education.”

Jefferson said the best way to inform someone is through education. Well in this matter, the best way of educating yourself on our government is to continue to be informed.

Wed Mar 10 , 2010
On Sunday evenings, employees at Backstage Café at Parker Theater are required to discard all food not sold over the weekend. When the café closes at 6 p.m., shelves are cleared and containers of premade salads, sandwiches and pastries all go in the trash. Food waste on campus happens daily. […] 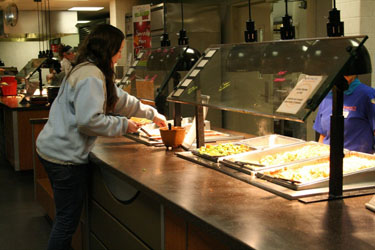