Anybody who has watched the news on television or read a newspaper in the past eight months has seen the words “swine flu” more than a few times. It seems as though every media outlet is saturated with coverage of a virus no more dangerous than seasonal influenza.

In June, The World Health Organization (WHO) instituted a “phase 6” pandemic alert with regard to the H1N1 virus, commonly known as swine flu. This simply means that the virus has the potential to spread from human to human and has facilitated community level outbreaks in at least two countries.

According to the United States Center for Disease Control and Prevention (CDC), “designation of this phase will indicate that a global pandemic is under way.”

When any disease or virus substantially exceeds what is expected, based on recent experience on a global scale, it is considered a pandemic by WHO. Considering this definition, the distinction of “pandemic” is dependent primarily on expectations. Given the fact that little was known about the H1N1 virus before 2009, just a few deaths internationally could imply the virus’ pandemic status.

Among the sea of newscasts, newspaper articles, special reports and breaking updates, it can be difficult for a consumer to decipher what the swine flu actually is let alone the implications of its presence.

According to the CDC, swine flu is simply a new mutation of regular seasonal influenza viruses, which inherently mutate seasonally.

It spreads the same way – “through the coughs and sneezes of people who are sick with the virus.” And symptoms include “fever, cough, sore throat, body aches, headache, chills and fatigue. In addition, many people also have reported nausea, vomiting and/or diarrhea.”

Is what seems to be a regular flu-like virus worth so much media coverage?

Should citizens around the world be rushing to doctors for first dibs on vaccinations?

Or are we all just caught up in a saturated medium?

There seems to be much confusion with regard to the lesser of two evils: possibly contracting a moderately debilitating virus or introducing a syringe worth of a brand new vaccine for the immune system to deal with.

Although there have been deaths caused by the H1N1 virus, we still know little about its abilities for infecting a notable percentage of the world population.

For example, 13,000 Americans have died due to complications from seasonal flu viruses since January, according to a United Press International article. The CDC stated that worldwide annual deaths from seasonal flu are estimated between 250,000 and 500,000.

Only 302 Americans between April and July and 292 between August and October have died as a result of the H1N1 virus, the CDC said in an Oct. 24 report. At a rate of 300 deaths every four months, swine flu casualties will barely dent the almost half million annual seasonal flu deaths.

In a more extreme case, Australia has yet to report an H1N1-related death despite its recent swine flu outbreak even though between 1,000 and 2,000 people die annually from seasonal flu viruses, according to a Sydney Morning Herald Article.

According to a Melbourne, Australia publication called The Age, the swine flu has been exaggerated by WHO in terms of its death rate. An expert in epidemiology from Stanford University, Dr. Shelley Salpeter, said swine flu “is just like an ordinary flu. There is nothing fancy about it in terms of its mortality.”

Still, the media is saturated with tips, updates and prevention methods regarding the swine flu. The CDC’s Web site has even gone as far as giving citizens tips on how to properly wash their hands after using the bathroom. The CDC also has informed the American public to “cover your mouth and nose with a tissue when coughing or sneezing.”

Maybe it’s just me, but these seem like pretty standard practices. Do we really need a government organization instructing us on simple hygienic practices?

I am not opposed to the CDC keeping the public informed about new developments concerning a new virus, which they have been doing weekly since April. I am opposed to the notion that we are too dumb to take care of ourselves.

As far as I am concerned, the symptoms are less serious than many other widespread illnesses and prevention methods are based on practices that infants have mastered.

Yet headlines like “The right prescription; Preparedness and integrated response” and “Stay safe from swine flu with 3 simple steps” continue to line the front pages of publications around the world.

I believe that this can be attributed to the simple fact that fear sells.

If a headline is not warning the public of the dangers of the H1N1 virus, it suggests dangers associated with the vaccine.

If people have nothing to be afraid of, are they less likely to pay attention to breaking news?

I cannot succinctly quantify this – however I am confident that when people are afraid, they are more willing to read and watch the news.

As far as the dangers of the H1N1 virus go – I am not worried about contracting it. And if I do, I will take a few days off, drink some extra orange juice and take a regular regiment of echinacea.

As far as the current news media’s arguable exploitation of the pandemic – I am both disappointed with and unwilling to believe most of it. If and when I am genuinely concerned about a disease or virus, I would much rather trust an organization like the CDC or an accredited scientific journal over USA Today or MSNBC.

On June 19, The Washington Post published an article called “A Flu by Any Other Name.” In this piece, scholars renamed the swine flu with a focus on “avoid[ing] defaming Mexico or speaking ill of pigs.”

One of my favorites was proposed by Esther Gulli, who works at the University of California at Berkeley. She proposed the name “CNN flu,” since “they truly made it what it is today.”

Walkway Opens Over the Hudson

Wed Nov 4 , 2009
A historic bridge over the Hudson River opened to the public this month. The former Poughkeepsie-Highland Railroad Bridge has been transformed into the Walkway Over the Hudson, a state historic park open to the public. More than a mile long, this pedestrian and cyclist bridge provides an outdoor excursion that […] 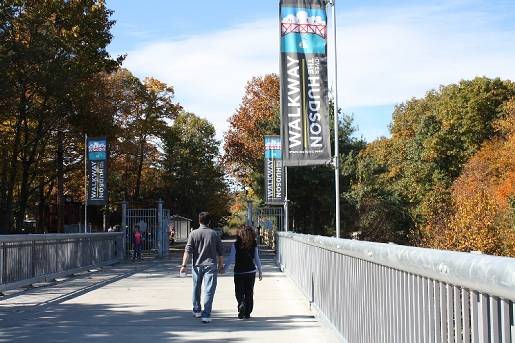