Anthony Chanza sits in his apartment on Greene Avenue in Ridgewood, on a February afternoon. His parents and brother are out. He has class in four hours at CUNY Baruch.

His apartment is a one-floor walkup. The vestibule has yellowing walls. His family is the only tenant and their landlord lives downstairs.

Anthony is playing some post-apocalyptic war game at full volume. Three long boxes of comic books sit under his desk. He hears the front door open downstairs and thinks nothing of it. The landlord frequently has “visitors.”

Anthony shuts everything off and freezes. He listens. He cracks the door to his apartment and peeks down the stairs. He could really use Spiderman today.

He goes back inside, picks up the phone and calls 911. He reports a fight. All the while, he fears for his own life.

He looks out the front window for the cops. Nothing.

A few minutes later, an unidentifiable man leaves through the landlord’s window and walks off into the neighborhood.

Anthony goes down the stairs. Blood is splattered in the vestibule.

The police get into the landlord’s apartment. The landlord is bleeding out on the floor. He dies before the paramedics arrive. A bloody shovel is at his side.

The police bring Anthony outside. He has no shoes on. His family gets home. His parents are scared. He is too.

The circus rolls in. Clowns with tape recorders and video cameras swarm the area.

“What happened? Whodunnit? Why?”

They will call it a “tenant-landlord dispute” on the 6 o’clock news.

The phone rings off the hook for the next week.

“What happened? Whodunnit? Why?”

Anthony is sick. The blood is still in the vestibule. Now it’s turning black.

Over the next two weeks, Anthony only leaves his house to withdraw from school or go to work.

He gives his two weeks’ notice. He gets fired anyway.

I ask Anthony to go out one night. There’s a punk show in Brooklyn. We end up outside, not watching the bands, just talking. It’s been three weeks since the killing.

“I’m just glad that I was there. That my mom didn’t come home to that, you know?” He’s all nerves. It’s too bad he doesn’t smoke. This would be a perfect time for it. “Just wish there was something that I could’ve done.”

“You can’t beat yourself up for it. You didn’t know if that guy was a professional killer or anything.”

“Yeah, but you never know. Maybe he’s an expert with a shovel.” I sat on the back bumper of a van. “I mean you said he was a bad guy. Gambling debts? Hookers? Maybe he just got what was coming.”

“Does anyone deserve to die though?

“No. But better him than you. You did everything you could. You called the police. They got there too late. But you did your civil duty.”

“I guess. I just wish I could have done something.”

His family finds a new apartment around the block. This time their landlord is not an elderly Italian man.

He is Pete Traina, a trained martial artist who has been bestowed the honorary title of “Shihan,” or master instructor. His building is surrounded by a wrought iron fence on one side. Behind the fence, wizards and dragons guard the property. A sign exclaims, “Praise the Lord and pass the ammunition!” He’s been in Bruce Lee movies.

I stop by the apartment on my way home from Brooklyn. Anthony comes down to let me in. He turns the lock, the bolts sliding begrudgingly into the door.

I follow him to his new place. The hallway is lit by one light bulb and before the stairs there is a huge padlock on one of the doors.

“Don’t worry about that.” Anthony caught me staring at it. “It’s just the door to the deli next to us.”

We walk all the way up to the top of the stairs. The landing is covered in potted ferns. He unlocks the door. His mom is on the computer. We are all in the kitchen. She turns toward us.

“Oh, hi Pierce. How are you?” I don’t have a chance to answer. “Anthony, did you shut the light off downstairs?”

“Ah. No, I forgot. Gimme a sec. My room is the last one. You can wait in there.” He runs downstairs.

The apartment is almost one continuous room. After the kitchen/computer room, there is a makeshift living room followed by Anthony’s parents’ bedroom. Anthony’s room is last. It is by far the biggest room but he shares it with his little brother. It’s the only room besides the bathroom that has a door. Their beds are mattresses on the floor. This place is not big enough for four people.

Anthony comes back upstairs. His mom lectures him. I wait and turn on the TV.

“Is the light being on such a big deal?” I ask as he walks in.

“Yeah kind of. Our new landlord has a lot of rules. We’re not allowed to have overnight guests and we have to be careful about leaving lights on and doors unlocked.”

He slouches in his desk chair. The same three long boxes of comics are under the desk. Video games and clothes are scattered around the floor. He perks up a bit.

“I’m working at a fire security company. Taking phone calls and stuff. I guess it’ll be pretty easy. 9 to 5, Monday through Friday.”

“That’s killer, man. Gives you something to do since you don’t have school anymore.” I’m a little underwhelmed. A fire security company? He’s 20 years old. This is a guy I planned on taking over the world with. That’s what best friends are for. You know, do it all, see the world, hang out on beaches with pretty girls while getting rich off the comic book we wrote that is getting made into a movie. You know, no worries. But right now? A fire security company? “When are you going back to school?”

“You have to, man. What else are you going to do?”

“Right now, I’m gonna play some games. Wanna play?” He offers me a controller. He’s a little ticked off.

“I just don’t want to go back to school if I don’t know what I want to do. It’s a waste of time.”

Yeah, that’s why he works a dead end job.

In a few months, we’ll probably have the same conversation.

The game flickers on. “Street Fighter.” One of the characters could be his landlord.

Under the Golden Arches

Thu Nov 5 , 2009
Oh, God. Did I really just do that? Did I really just hand in a job application at McDonald’s? For a moment I picture myself hopping over that counter and strangling anyone in my way to get that piece of paper back. I reach for the door, but then stop. […] 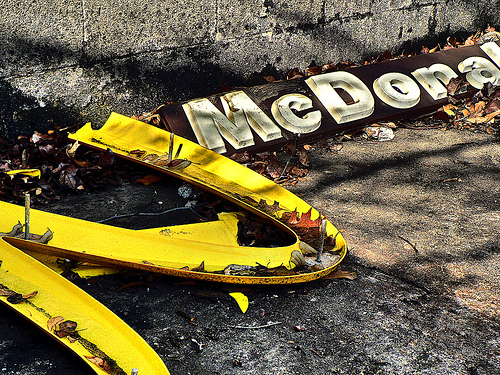