The concept of social networking has been evolving rapidly over the past 10 years. Remember commenting, blogging and picture sharing? Now 140 characters or less is all it takes to become an internet celebrity.

Twitter’s Web site states that its main function is to “stay connected with friends, relatives, and coworkers.” However, it seems as though our generation is more interested in morbidly stalking celebrities and obsessing over mundane chunks of information.

Let’s think about this for a moment: Why would anyone be interested in what others are doing every minute of the day? More importantly, who feels compelled to update the world on their most insignificant happenings throughout the day?

I got news for you, kids. Nobody cares when you brush your teeth or where you do your homework.

Well, to you I say: Call your friends and family on the phone to talk about your good grade in Freshman Comp. Why do you care if a bunch of cyber-friends are interested in you? Isn’t the attention of your immediate loved ones enough?

I don’t want to completely shun the idea. As many students in the Communications and Media department know, there is no reason to fight evolving media. Twitter is the future just like Facebook was the future five years ago. Political candidates can update citizens during speeches and meetings and sports bloggers can keep their readers posted on their opinions play by play. There certainly are people of interest that might be in high demand on a Web site like Twitter.

Take for example, our president. Nobody has graced the front page of the New York Times more in the past 9 months than President Barack Obama. We hear about when he makes a speech, when his wife wears a red dress or when his little girls bump their heads. It seems like President Obama is in high demand, does it not?

Then why in the world is he number 11 on Twitterholic.com, a Web site that keeps real-time tallies on the most popular Twitter users. Obama “Tweets” almost every day but has still fallen behind in terms of “Followers” to names like Ryan Seacrest, Britney Spears, Shaquille O’Neal and of course, Ashton Kutcher.

That’s right America. Your president is less popular than the guy from That 70’s Show and Punk’d in a social network targeting the same demographic that was chanting “change” last November.

This notion is a prime example of the attention economy as laid out by Advertising Age media columnist Simon Dumenco. In a piece titled The Real Meaning of Ashton Kutcher’s 1M Twitter Followers, Dumenco explains that the more time consumers invest in catering to people like Kutcher’s need to be popular, the less the readers actually benefit.

“The Many are actually investing their mind share –their currency in the attention economy –in a way that leads, for the most part, to the enrichment of ‘The Few,’” explains Dumenco. “To put it rather cynically, a certain portion of ‘The Many’ are getting ripped off-deprived of more and more of their mind share for little or no gain (or possibly a big loss).

Dumenco then wraps up his article by stating that if the pinnacle of the attention economy is Kutcher, then another bailout is needed.

This issue does not only idle with the uneducated and the bored.

I was sitting in class last week when I noticed a Twitter trend. I couldn’t avert my eyes from three kids who were browsing Twitter during a lecture. One was visiting pages of celebrities like Lil’ Kim and Kanye West, another was constantly refreshing his own Twitter page (the background of which is plastered with shirtless pictures of himself), and the last was clicking between tabs of her Twitter page and her Facebook page.

I’m no saint. I browse the internet sometimes during classes in computer labs. But never have I found myself in an academic setting, with a professor lecturing and Lil’ Kim’s latest musings in front of me.

The scene culminated with about three minutes left in class when one of the Twitterholic students raised their hand. I watched in awe as he engaged in a poorly worded, unintelligent, yet topically relevant conversation with the professor as he updated his Twitter status.

The point is: I’m frustrated. I’m not frustrated at the fact that there is a Web site that’s only purpose is to make insignificant people aware of insignificant facts. I’m frustrated that a technology with such potential for constructive application is primarily used for such shallow, childish purposes.

Thu Oct 8 , 2009
It is easy to drown in the sea of digital media content. For anyone looking for senseless entertainment, we have the ever popular YouTube. For information-savvy minds, we have TED.com. TED, short for Technology, Entertainment and Design, is owned by a private nonprofit organization called The Sapling Foundation. Founded in […] 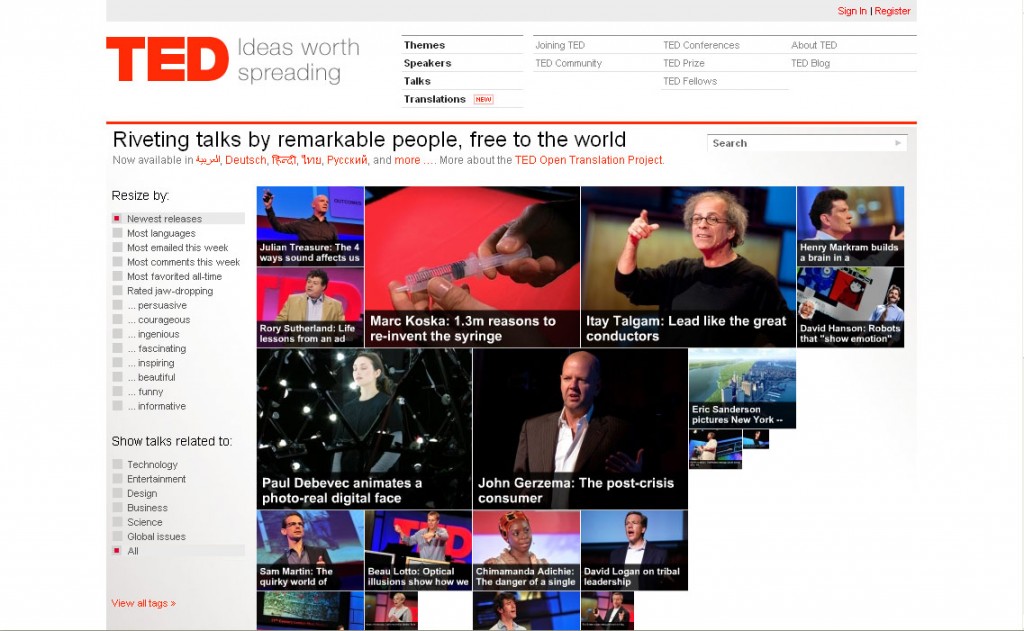