Independent filmmakers and the YouTube generation have received a helping hand from the folks at IndyMogul.com. The site focuses on those who love movies and want to create special effects without breaking the bank. With videos on low-budget filmmaking tips and tricks, their backyard special effects (BFX), are a cheap and effective way to spice up a homemade video. This online television network not only brings its viewers do-it-yourself content, but also talks with industry professionals. Created by Erik Beck, Indy Mogul is part of Fred Seibert and Herb Scannell’s Next New Networks Web television company. This online television network is the mother to YouTube channels like Barely Political, Channel Frederator, Fast Lane Daily and TMI Weekly.

Indy Mogul has several elements that make up its content. Along with viewer-generated content, a show called BFX is hosted by Beck and focuses on how to create special effects for a fraction of the cost of a Hollywood production. This is ideal for the independent filmmaker who may not have much money to go around. Viewers can learn a plethora of things including how to create fake glass to make a fake chemical burn. BFX airs every Monday and is brought to life by the support of its viewers. Another show on the network is called “Q and Erik.” This show is a monthly live broadcast where viewers ask Beck questions about production, editing and filmmaking in general. For the film nut looking to see what’s happening in theaters, Indy Mogul has “Beyond the Trailer” and “Movie Math.” Grace Randolph hosts both shows, which are geared toward the film industry and movie reviews. Indy Mogul provides a fun and easy way to make a good video into a great video.

Fri Oct 9 , 2009
FunnyorDie.com is a Web site that features unique and hilarious videos that viewers can vote on. Viewers have the power to decide the fate of videos by voting whether it is “funny” or if it should, yes, you guessed it, “die.” This site features a combination of original and exclusive […] 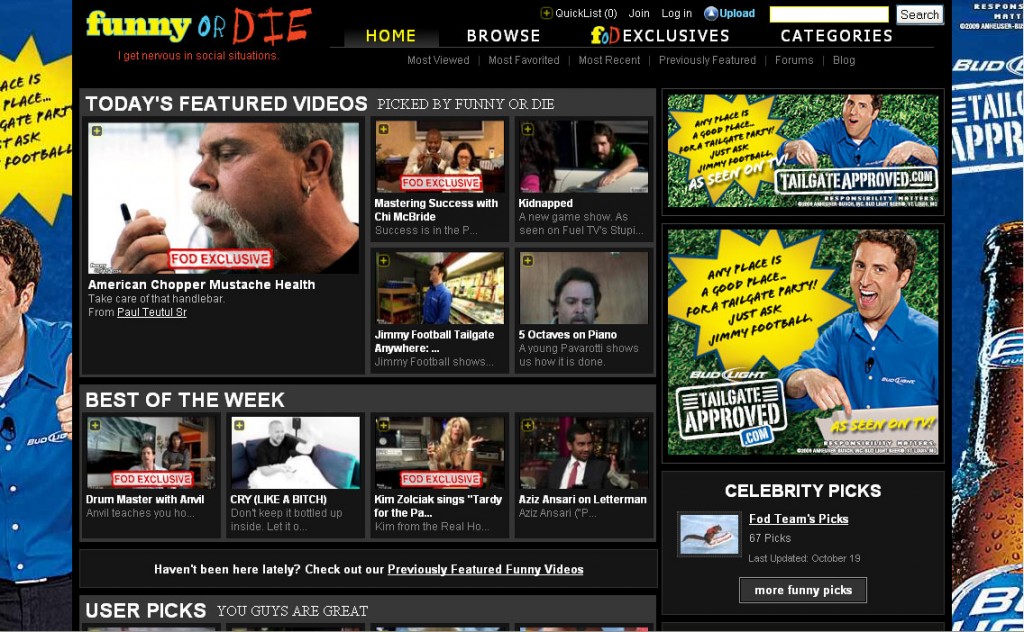