I thought I’d follow up my last piece with another article about the music industry. I have been a musician for about eight years and in 2006 I traveled to the midwest and back with a rock ‘n’ roll band.

As many musicians who have been on tour could say: “It was the best and worst time of my life.”

I played a show every night in a new city in front of new people that somehow knew the words to the songs I was playing. It was an experience like nothing I had ever felt before.

Although we were signed to Rust Records, (now nonexistent) an imprint of Universal Music Group, I managed to walk into my parents house after a month on the road flat broke. I spent $200 on food, cigarettes, gas, parking tickets and numerous other expenses.

Considering contemporary business models, how can a record company afford to pay for an entire record’s production and promotion, like Rust did for the band I was in, but not pay for expenses like gas and food while a band is touring to promote the record paid for by the same label? This makes no sense to me, especially considering the fact that a record label will make absolutely no money, or possibly lose money, if an album does not sell.

I know some independent record companies offer tour support to artists, but certainly not the ones who really need it. In my experience, I have only heard of mid-level bands (and bands on major labels) receiving tour support as well as making over $400 a night from venues. When I was traveling, we were grateful when we got $100 to split between five of us.

It is apparent that the odds are stacked against musicians once they enter the recording industry.

It seems like only artists who are established enough to make a couple hundred dollars a night from ticket sales are eligible for tour support. However, smaller non-established signed bands don’t get anything – then when it comes time to tour, they have no money to put in their gas tank to promote the record that the label dropped thousands on.

Artists cannot even use record sales as a financial crutch.

When a label pays for the production and advertising of an album, the musicians do not see a dime in royalties until the label recoups their losses. We must also consider that it’s 2009; when was the last time you bought an album?

In an Advertising Age article titled “Marketers, Musicians Could Make Beautiful Music Together,” P.T. Black discussed a current trend in the Chinese record industry that I can imagine the American industry adopting.

Given the amount of music that gets pirated, Chinese artists receive endorsements by and make money from advertising sponsorships.

“The downside is there is little support for non-mainstream music.” Black said. “Social-networking technologies are slowly compensating for that, reducing the cost of promotion and connecting bands’ fan bases. But there is another opportunity – advertisers stepping beyond pop and working with non-mainstream young artists. It’s not easy.”

In theory this is a way around the hypocrisies of the American mainstream record industry. However, as Black explained there is not much of a market for non-mainstream music in the eyes of major advertisers; and as I explained in my last piece: tailoring music to a predetermined format for the sole purpose of making money is unfair to consumers and musical integrity alike.

The do-it-yourself (DIY) age of recording is upon us. Artists are creating, recording and distributing music from their own homes. But how much money are they making? I can say with confidence that generally DIY artists cannot earn a living wage.

It is possible to be a professional musician and live comfortably – ask anyone who has “made it;” from Stan Getz to Green Day.

From personal experience I am positive that getting signed to an independent label and trying to climb the ladder to success is certainly not the best way to do it.

Sun Oct 11 , 2009
Hidden away on Kelder’s Farm in the small town of Kerhonkson stands Chomsky, a 13-foot-6-inch garden gnome. Chomsky was originally built by artist Maria Reidelbach and kept at a miniature golf course in lower Manhattan but was moved to Kelder’s Farm after the course was closed, where a new 10 […] 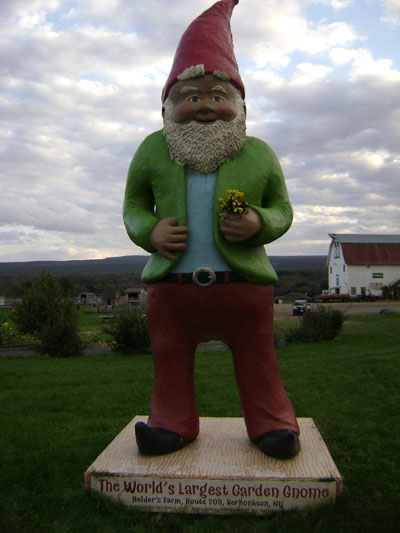