Shoes on display bore the same dirt they acquired when those “more fortunate” had walked in them. Tired clothing hung against the dingy, pegboard walls. A few television sets like the one from my grandparents’ house when I was 4 stood untouched, as if they had grown roots into ripped green carpeting. Chipped ceramic rabbits, empty flower vases and other casualties of redecorating filled a set of shelves a few feet away. The dim lighting echoed the dreariness of the rain bound day. There were very few shoppers. “This is really depressing,” I thought, immediately ashamed, because some people have no other choice.

I flipped over tag after tag—nothing I touched was priced more than $3.99. I was at the Salvation Army Thrift Store to research charities in the time of a recession for a story for a journalism class. I was also completely out of my element. I couldn’t imagine myself wearing the used, cheap clothing, and this made me feel like the most shallow person on earth.

Wandering, I found a back room with floor to ceiling shelves filled with old vinyl records and books that had gone yellow. The stale library smell permeated the air as densely as smoke does in a fire. As I looked through about 50 copies of the same audiocassette tape—someone’s failed attempt at a children’s record—I studied two other shoppers, a man with a kind, worn face and a girl of about 2 with brilliant golden hair. The girl was taking great pleasure in the books and the man looked happy that she was happy. I turned my head as quickly as I could when he noticed me watching.

Perhaps they were bargain shoppers, and not poor at all. But I had been warned throughout my childhood to “not stare at those less fortunate because it is impolite and will hurt their feelings.” Later, as I walked to my car, I spied the man collecting the girl and their purchases into a beat-up gray car. This time I looked carefully: the car was an Oldsmobile. The man’s back was turned to me.

This was not at all as I had imagined it would be. A small room off an old farmhouse kitchen? That’s it? Whenever I heard food pantry, I always imagined a big, bright room with shelves and shelves of food. My fantasy was too much like a grocery store. I was sure the volunteer could read the disappointment on my face.

“How much can they get a week?” I asked.

“They can take three days worth of food,” the volunteer said as she pawed the shelves. The sunlight shone through the window, reflecting off her dirty blonde hair. Her clothes were plain- a powder blue T-shirt and dull, grayish-brown pants. I guessed she was about 50; she had soft wrinkles around her blue eyes. “Usually they’ll get a jar of pasta sauce and a bag of noodles. If they have children, they can take a loaf of bread and a jar of jelly and peanut butter.”

“Oh, that’s great,” I replied, hoping I was feigning enthusiasm well. “Can they take anything else?”

She told me they had a meat freezer. Oh, fucking thank God. Maybe I don’t have to leave here feeling like shit.

I asked to see it. There were more loaves of bread than meat in there—I could make out a few tubes of breakfast sausage and a package or two of ground meat.

I always consider reading “my guilty pleasure shopping and beauty” blog one of the most enjoyable parts of my day. But as if the cosmos had aligned to remind me to work on my story, an advertisement popped up alongside a post about stylish egg cups for Easter. “Help end the recession for one hungry child,” read the ad from World Vision, a charity organization. The words “end the recession” were in orange, as well as the button that said “Sponsor Now.” A small, black girl of about 2 (I don’t know why 2-year-olds were haunting me) with enormous pieces of coal for eyes stared up at me. A hand that clearly belonged to an adult reached over her shoulder holding an empty can. I immediately lost my appetite for lunch. That’s what always happened; I always felt guilty that I had what the less fortunate didn’t.

And then, I studied the girl further. Rosy, chubby cheeks. Pouty little lips. Skin that was not sallow or grayish, but a rich, milk chocolate color. Was I being duped? I imagined the advertisers sneering and laughing in their offices.

“We’ll advertise this on this makeupbeautypeoplewhoaremindlessreadthisshit blog. Sure to be plenty of dimwits who’ll take heart to this shit. Greta, your daughter looks adorable by the way! So glad we used her for the shot and not one of those real hungry children.”

Someone would chime in: “Yeah, those kids freak me out. How they’re all skinny and gaunt, but then have those poochy bellies, you know? I really don’t know how that happens!”

Then everyone would congratulate each other on a job well done and go off to Starbucks, Gold’s Gym or a sale at Bloomingdale’s.

I googled World Vision. The website seemed legitimate enough, but I was still bothered. The photos were all of beautiful children. Two young girls smiled toothy white grins over a notebook in school. A chubby Asian baby whose cheeks I wanted to grab smiled as he held a stethoscope. They looked fine! This did not make me want to help them. I wondered how many other people felt the same way.

“Look, there’s a bummer!” shouted Jeana on The Real Housewives of Orange County.

For some reason, I love this show about catty, spoiled housewives who have nothing else to do but fight with each other. But I was disgusted as Jeana and her 20-year-old daughter, Kara, strolled through a park spotting “bummers.”

“Ooh! There’s another one!” Jeana shouted, as the camera panned to a man lying on the grass, his head resting on a newspaper. The cameraman was quick to pan away from the homeless man, just as I had turned away from the war vet.

The moron must have said “bummer” a dozen times, never thinking it would 1.) be offensive and 2.) be on television, thus outing her to the entire nation as an insensitive bitch.

On its Web site, Bravo describes the episode as “Jeana Keough and her daughter, Kara, drive up to Berkley to move Kara into her apartment. They find themselves strangers among the “‘bums’ and ‘hippies.'” I describe it as so vomit-inducing I had to turn off the television and re-evaluate my choice in entertainment.

“Will work for food or room,” or at least that’s what I thought the Vietnam vet’s cardboard sign said. Not verbatim, of course, because I couldn’t bear to look at him as I pulled out of the Stop & Shop parking lot. In the same parking lot just a year before, I went insane trying to find a lost dog’s owner. I called everywhere—the number on his collar, animal services, the police department. I went all the way home, in the dead of winter at 10 p.m, cooked chicken nuggets and then brought them back to him.

I saw the vet in my rearview mirror holding up his sign as I drove away.

Thu Oct 8 , 2009
When students returned to SUNY New Paltz for the Fall 2009 semester they may have noticed that a lot of things had changed while they were gone. The more obvious changes include a large pyramid that is being built onto the Student Union building and parking lots and walkways that […] 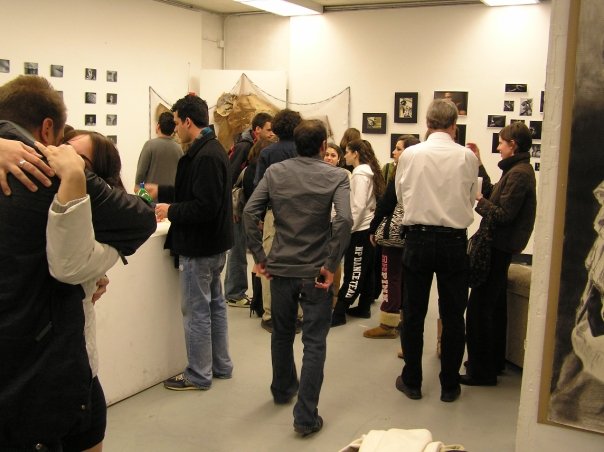