The New Paltz Cultural Collective is attempting to make a comeback. Since the group’s beginning in 2004, the collective has had a turbulent run filled with its fair share of ups and downs.

At its core the collective has always been a place fostering a sense of culture within the community, promoting local musicians, artists, poets and thinkers.

In NPCC’s most recent attempt to rally back, Sophia Wortzel, a student at SUNY New Paltz, has found herself behind the reins of this project. She is hoping to take her passion for the NPCC and knowledge of how the business has struggled to translate it into a working business model.

Wortzel explained there had been a distinction between members of the collective and ownership of the coffeehouse, which created confusion about event responsibilities.

“The events, which are the main part of the NPCC, ended up on the shoulders of the barista,” Wortzel said. “People from the collective weren’t pulling their weight because responsibilities were not clearly divided between 60 Main and the collective.”

Wortzel has found a way to eliminate this misunderstanding: unite 60 Main and the NPCC event space as one entity. The coffee shop and event space are now under the same management and 100% volunteer run by members of the NPCC.

Wortzel is optimistic about making it work.

“The reason I’m involved with the collective now is the reason I fell in love with it,” Wortzel said. “It provides an alternative to the bar scene. Have a nice drink that doesn’t get you stupid— or, stupefied, in my opinion.”

60 Main is a not for profit limited liability company.

“To be a member all you have to do is support the place,” Wortzel said of the collective. “Come in once or twice a week, it’d make a difference.”

At weekly Sunday meetings, members gather to divide responsibility for the coming week and plan musical performances, art shows and other events. Those who are trained as baristas work behind the bar and make coffee for customers, while those who are not trained work at the door, find artists and book events.

Wortzel explained that some baristas work in teams of two. One such team is Julian Nagy and Allie Snyder, who had found themselves at 60 Main playing Scrabble every night before joining the collective.

“I had been hanging out here a lot,” Nagy said. “A lot, actually. I was playing Scrabble here every night anyway with Allie. So Allie and I thought if we volunteer we can play Scrabble all the time!”

While Nagy jokes about the responsibility, he is dedicated to the space.

“The cultural collective is a group of people who want to sustain the spirit of that coffee shop culture,” Nagy said. “It’s the idea that this space is a Petri dish for poetry, art and music. It’s that place that struggles but still survives.”

In the week following the shop’s February 11 opening, the NPCC hosted Vulvapalooza, a precursor event to the SUNY New Paltz’s annual performance of The Vagina Monologues.

The event helped to boost morale for the struggling coffee shop, which had closed two weeks before. Former owner Betsy Garcia closed the doors because she could no longer afford to keep the space open before the NPCC took over management of the shop.

The coffee shop was decorated with red streamers and balloons for the opening while nearly 60 people squeezed their way into the resurrected space.

“It’s very cool,” Katie Rosenquist, director of The Vagina Monologues, said. “All these different and unique voices coming here to support a united cause.”

And that is exactly what the NPCC is trying to do on a daily basis.

Allie Snyder, volunteer of the collective and Nagy’s co-barista, loves nights like Vulvapalooza. She explains that it is those busy nights that help to make the NPCC what it is.

“Almost all the people I know [I met] through this shop,” Snyder said. “If they’re coming here, they probably support the same things I support: fair trade organic coffee and a place that allows for an open exchange of new ideas.”

It is clear to see the exchange of ideas is thriving at 60 Main. It is a shop that is not afraid of change and is always evolving. Walk in on Monday and then visit that Friday, and something has changed: furniture moves, art changes or new jewelry is on display.

“There are all these different ideas people have,” Snyder said. “We want them to bring them here. Anybody can put an idea into motion or come in with art. Everyone should be involved.”

Optimism and creativity pours from the walls of 60 Main, but how long will it last? Is positive energy enough to make rent?

For now, the answer is yes according to Wortzel.

The fact they do not have to pay for labor is what keeps the business afloat.

“I donate my time here, but it’s not like I donate all my time,” Nagy said, explaining why he’s willing to work for free. “The work isn’t particularly hard, either. I look at it like I get to hang out and serve people coffee.”

“Sometimes, though, I forget I’m a volunteer,” Snyder said. “I’ll push myself so hard, and I’ll get sick of it. Then I need a break. Because that’s not the kind of energy anyone should bring here.”

The volunteers, who tend to be students, enjoy the space for what it is: a relaxing atmosphere away from campus.

Nagy said he believes the new mode of operation at 60 Main is working well.

“Sure we have some flaky members, but it hasn’t been a huge deal,” Nagy said. “We have enough strong members so that we can keep going. It’s not like we’ve been at our wit’s end or anything like that.”

Wortzel said she hopes the shop can continue to make enough money to sustain rent and supplies.

In the future she wants to entertain “cool, funky and weird events” to gain the attention of people who have never been there. She hopes to spark their interest and draw them in so they can use the NPCC as a creative outlet.

Snyder explained that there are constantly more people trying to get involved. They have created a curator position, which finds local artists and books them for art shows. They have been screening and booking bands for shows, open mic night has become a staple on Thursdays, and recently Tuesday has become Craft Night. Wortzel, who plans to graduate SUNY New Paltz in the spring of 2010, hopes she can spark the interest of others and pass the torch she has carried.

“ I’m not going to be in New Paltz the rest of my life,” Wortzel said. “So the real goal is just to pass the passion along to another generation below me because maybe this will be able to work, but we’re not going to know unless it continues to trudge through.”

Fri Sep 25 , 2009
Imagine waking up every day consumed with the one thought, one goal, one destination. Such an obsession consumed sculptor Harvey Fite, as he spent 37 years working on his life’s work, Opus 40. Fite’s piece, which spreads out over six acres of land, is compiled of finely fitted stones, curved […] 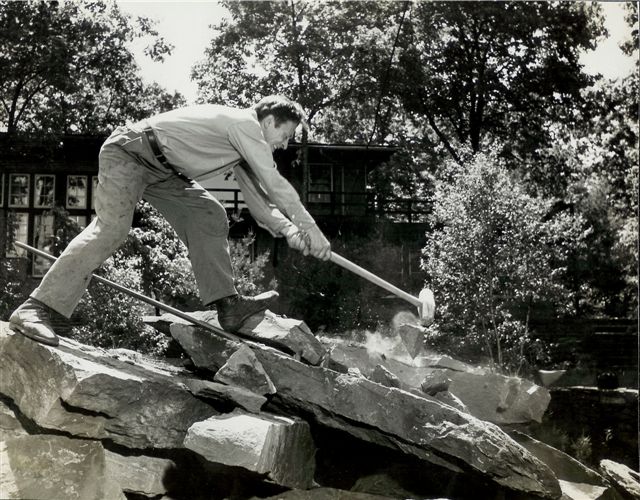