The table was littered with empty cans of Pabst Blue Ribbon and food debris. At the center was my laptop, which recorded the conversation between me and three-fourths of the Nuclear Holocausts – Evan Schlissel on vocals, Geoff Diamond on bass and Ian Elkind behind the drum set. Missing was Cahill Walsh, their guitarist (as well as Andrew Adelman, his recent replacement).

As Diamond took a sip from his beer, he recalled the band’s origins. “Evan and I went out into the cemetery one night on GG Allin’s birthday, tripping on acid and we pissed on GG Allin’s grave at the same time,” he said. His band mates and I laughed.

“His soul went through our piss, through our urethras and into our bodies and we formed the Nuclear Holocausts,” he said.

In reality, the band formed when Schlissel and Diamond met at freshman orientation at SUNY New Paltz. While their true origins are not as exciting as their “back story,” this is no run-of-the-mill New Paltz college band. They don’t play background music for dance parties, they don’t “jam,” they don’t want you to “chill” – they want to hurt you and they want you to get very, very pissed off, but have the time of your life doing it.

With snarled vocals and speedy instrumentation, the band’s sound brings about hints of New York City’s Leftöver Crack, California’s Dead Kennedys and Boston hardcore legends like Jerry’s Kids and Gang Green, but none of the members are particularly into punk.

“We don’t necessarily sound like any of our influences,” said Schlissel, citing Rage Against the Machine and David Bowie. “We channel them in our own way.”

The band’s MySpace page describes them as “Glam-Punk-Hardcore,” but the glam aspect doesn’t seem to show in their music. “We kind of strayed a little from the glam part…but I still like David Bowie,” Schlissel stated.

The Nuclear Holocausts’ lyrics deal with a variety of themes. Their song “Skull Bong” is about a real incident involving two Texas teenagers who dug up a corpse in order to turn its skull into a bong.

Occasionally, the band’s lyrics veer into political territory, like the easily misinterpreted, “Military J’s.” The song’s full title is, “Jews in the Military, Worse than Gays,” but the lyrics are not as offensive as the title may indicate. According to Schlissel, the song refers to a law that prohibited Jews from joining the military during the American Civil War. At the same time, Jews were taxed for not joining the military, creating a catch 22 that is arguably much worse than the one gays face today in regards to the military.

“You can’t take something like music so seriously, when people are just having a good time,” Elkind said.

“Yeah – don’t shit on my parade,” Diamond added. “If you don’t like it, just change the channel.”

So what might one expect to see at a Nuclear Holocausts show? Elkind described the onstage personas of the band: “[Evan] gets dressed up in the most extravagant looking thing and Geoff is just naked all the time, Cahill’s the pretty boy and I’m always trashed,” he said. And Diamond isn’t just always naked, he’s also violent.

“You’re not gonna listen to us in your spare time, sitting in your room”~Evan Schlissel

During a show that took place in the band’s basement, he threw his bass down in order to run out into the pit during a part of a song. On his way back, he ran full speed into Schlissel, nearly knocking him unconscious.

“He just slammed him into the wall,” Elkind said. “It was unexpected and it was great, but he almost knocked out our singer.”

The band’s antics don’t just take place onstage, however. Elkind has specific tactics for getting the band pumped up for performances. “One time they wanted to practice and I was like, ‘nah, I’m not coming. I’m not going to show up,'” he said.

“We had a show that afternoon and he was missing all morning,” Diamond added.

Elkind went on, “I planned it. I told my girlfriend, ‘Brittany, I’m not going to answer the phone. I’m going to be a fucking dick and they’re going to get hyped – I don’t give a fuck.'”

One might ask, don’t antics like this hinder the progress of any band? Not according to Elkind. “Everyone was so high strung and ready to go that the music came out the way it should sound, with all the angst and energy.”
“I can’t do it every time though because I might get punched in the face,” Elkind said.

Along with the four members of the band, there is another element to their stage show – Dan Pomarico-Maxson. Though he was never a part of the band, he still contributes to the live Nuclear Holocausts experience. “He’s like our version of a hype man,” Schlissel said.

“He’s completely incoherent on stage. He introduces us with no regard to it making sense,” Elkind added.

Diamond went on, “He’s been on a Speak & Spell kick too. He’s been trying to get this Speak & Spell to go through the mic. Usually it just gets yelled at.”

It should be obvious at this point that the Nuclear Holocausts’ music is best experienced in a live setting.

“You’re not gonna listen to us in your spare time, sitting in your room,” Schlissel said. “It’s about the live experience. You might not like the music, but I promise that I’ll entertain the shit out of you while we’re playing.”

Thu Apr 16 , 2009
Andrew Lipkowitz is a Dec. 2008 graduate of SUNY New Paltz’s journalism program. Since graduating, he has applied to over 100 jobs, from journalism to public relations, marketing, advertising and even secretarial positions. Only recently did he find a part-time job at an insurance company. In New York State, the […] 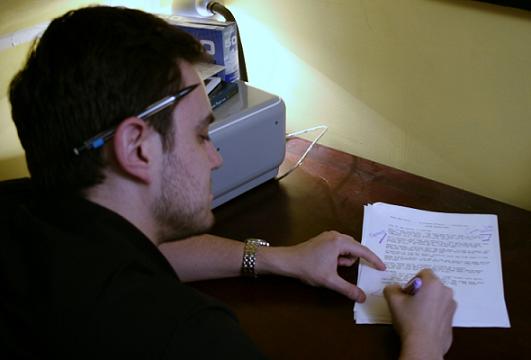