Alice O’Connell, 82, feels lucky.A secure job and her choice not to have children allowed her to save nearly three-quarters of every paycheck she ever made in her 49 years as a bank teller in Ridgewood, N.J.After receiving a modest inheritance, she put a 30 percent down payment on a small home in 1954 and owned it outright by 1962.She retired in 1993, sold her home and moved into her long-time boyfriend’s house.

Now, 15 years into retirement, O’Connell collects monthly Social Security checks and draws from her well-funded retirement account to cover her living expenses.She sometimes reflects on her lifestyle choices and how they relate to current Social Security policy.She wonders how other people would survive should the Social Security system ever go bust.

“What I did was extreme,” O’Connell said.“Not everyone can live as I have, and not everyone should.All I know is that at this day and age, I couldn’t live on my savings alone, nor could I live comfortably on Social Security alone.”

“But without any action, there will be trouble,” said Michael T. Salvia, a certified financial planner.“How much trouble, is impossible to say.”

Salvia, who holds an M.B.A. in accounting and business administration from Mount St. Mary College in Newburgh, N.Y., believes the best way to alleviate the burden on Social Security and ensure its viability is to raise the cap.“Right now, once you earn $98,500, you stop paying Social Security, so everything you earn above it doesn’t count.Raise it to $200,000 and we’ll have twice the money,” he said.Salvia, the president of theCommunications Workers of America (Local 1120) in Poughkeepsie, N.Y., admits he speaks as a Democrat and as a union leader when he says “all we have to do is raise the cap so everyone pays a fair share.”

It is difficult to determine what a fair share is. The average monthly Social Security disbursement is $1,153 for a single person, which works out to less than $12,000 per year. The average married couple receives $20,000 annually.As work pensions disappear and employer 401(k) contributions phase out, the need to protect and strengthen Social Security heightens.

It is still unclear what will happen with Social Security under Obama’s presidency. According to Obama’s Web site, “Obama does not support uncapping the full payroll tax of 12.4 percent rate. Instead, he and Joe Biden are considering plans that would ask those making over $250,000 to pay in the range of 2 to 4 percent more in total (combined employer and employee).”Any changes to the current policy would be “phased in over many years.”

When President Roosevelt signed the Social Security Act into law in August 1935, millions of elders were relieved from the claws of poverty.Alice O’Connell, who was 9 years old when this piece of legislation was written, can’t imagine what life must have been like for people like her maternal grandparents, who lived off whatever an extended family could spare once they were too old to work.“People who work their whole lives deserve to be taken care of when they are older,” O’Connell said.“There is no reason that a Social Security cap should even exist at all.”

“A number of different polls I’ve been studying show that around 78 percent of the population supports a ‘millionaire’s tax’ to stop the budget gaps,” Salvia said.“This can be translated to our attitude regarding Social Security.The American people are behind what I and many others have suggested for years.”

Patriots and Pharmaceuticals: The Debate Drags On

Thu Feb 19 , 2009
Can treating a sinus infection land you in jail? If an obscure law enacted as part of the USA PATRIOT ACT were strictly enforced, the answer would be “yes.” In March of 2006 the Combat Methamphetamine Epidemic Act of 2005 was incorporated into the PATRIOT Act. The act banned over-the-counter […] 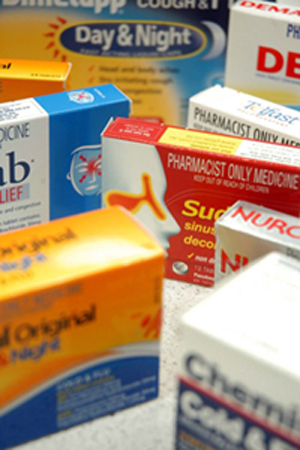