Byron “Barney” Calame, a passionate journalist for over 40 years, had a simple, specific reason for entering the field of journalism: “I wanted to catch the bad guys.”

There was a joyous mood in the SUNY New Paltz Honors Center as various speakers said warm words for Calame, who was honored Feb. 12, 2009 as the eighth James H. Ottaway Sr. visiting professor for the Communication and Media Department. The short speeches given about him were accented by an orchestral fanfare coming from a band rehearsal a few rooms down in College Hall, which added to the excitement of hearing words of wisdom from such a prestigious journalist.

Calame worked for the Wall Street Journal in New York, Los Angeles, and Washington, DC. In 2003, he was “pulled out of retirement” by The New York Times but finally retired from the newsroom in 2005. He has won several awards for his work, including a Loeb Lifetime Achievement Award in Business, Finance and Economics in 2005.

He considers his writing to be a way of “giving a voice to the voiceless,” and acknowledges that the business aspect of writing is more important now than ever– publications are not receiving the revenue they need to survive. Calame believes that providing free news on the internet (as opposed to charging for print) is ruining the business model of the newsroom.

“The business model is important,” he said, “I’ve never seen so many people out to sea—no one knows what to do to get revenue.” He sees that there is a growing need for what he calls “serious news,” where the reporter gathers and writes his own news, as opposed to publications such as The Huffington Post, a blog in which news is gathered and simply dispersed.

However, Calame does see much more potential for today’s newspapers. Unlike many old-school print editors, he doesn’t view internet news as the bastard son of newspapers. Calame said that blogs are important because they open up a forum for discussing different points of views, as a marketplace of ideas should. The class he’s offering, entitled “Journalism & Integrity,” will be observing blogs and other forms of online newscasts, with the intent to analyze the integrity of the publications, and “pick through the essential principles” of honest news writing. The most important of which, he states, is “being a good citizen”–which includes catching the bad guys.

Thu Feb 26 , 2009
Santa sits with sunglasses on as children get their picture taken on his lap for free. Wood burns in a fire pit a few feet away. Later, there will be a tree lighting ceremony and Christmas carols will be sung by a local singer/songwriter. Parents and children gather with hot […] 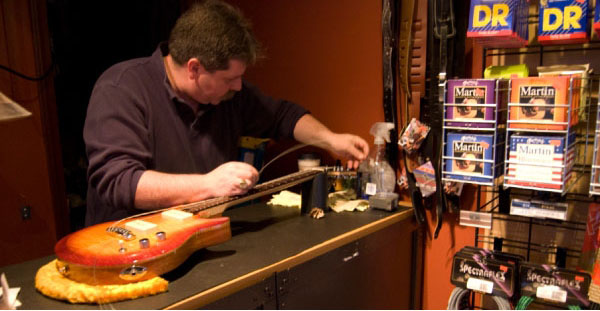