What’s worse than failing a college course? How about not even getting a chance to study for the class because you can’t afford the textbooks?

A sophomore majoring in history shares in the problem of not being able to afford textbooks. Amy Nagy has been searching for on campus jobs since the first day of the fall semester. She hoped that by finding a job on campus she would be able to reimburse herself for the 14 textbooks she bought for her classes. Because of the amount of money she spent on textbooks, she fears that she may not be able to afford any textbooks for the spring semester.

Nagy tried to apply to places on campus such as Oscar’s, the bookstore, and the Athletic and Wellness Center, but was unsuccessful. “I was told to look on the temp service web site and contact the employer via phone call or email,” she said. “It was really frustrating because by the time I had contacted the employer, all of the jobs had been taken.”

Nagy worked all summer at a golf course in order to afford the textbooks she purchased in the fall. She worries that because she was not able to find a job this semester, she may not be able to afford any textbooks for next semester.

Although there are more work-study jobs for students on campus, not every student is eligible to receive work-study. According to the financial aid office’s Web site, “Eligibility is based on need as determined by the Free Application for Federal Student Aid (FAFSA) and the availability of funds at the time of your application. Work-Study funds are limited and are awarded to the extent that funding permits.”

So how does a student get a job on campus? In order to be employed, students must go online to the school’s career Web site and download the temporary service packet, which lists employers’ information and other criteria. After doing this, the student should fill out the forms of the packet and call potential employers.

The best suggested time for students to look for on campus jobs is during the first week of the semester. However, similar to Nagy, many students who did this were unsuccessful and are still currently unemployed.

Each department listed in the temporary service packet has its own employer. According to the Temporary Service’s Web site, “Hiring decisions are made solely at the discretion of the hiring department. Not every department on campus has Temporary Service funds to hire students.”

For the few who are employed, working on campus can be frustrating. For one, the school does not pay any of their student employees more than a flat rate of $7.15 per hour. This would not be a concern if a student worked a decent amount of hours every week. However, most positions offered to students have a limited number of hours based on the amount of student employees there are and the hours of operation.

Starr Lederer , a sophomore, is a fitness instructor at the Athletic and Wellness Center. This position required Starr to travel home to Long Island and receive a certification. After Lederer received her certificate, she was then able to apply for the position. Lederer applied in early October and began to teach classes on Nov. 6, 2008.

“I got certified then supposedly the budget did not have room for my class and I wasn’t teaching [so] I started subbing,” Lederer said. “It was not until [November when] I actually got a class on Mondays at 5:30 and permanent subbing for someone on Thursdays.”

Lederer had been promised the position and was told she’d start in October, but ended up waiting as long as a month to actually start. She only works two hours a week and is paid the flat rate of $7.15. Because of the low wage, Lederer still has been unable to make up for the money she spent to become spin certified.

When it’s impossible to get an on-campus day job, there’s always the option of becoming a night host. The night host job requires one or two students to sit at a desk by the front entrance of their hall and ask for people’s identification when entering the building.

Although new job opportunities are advertised on bulletin boards throughout campus, most of these jobs are targeted toward potential professors, cleaning services or professional assistants. While a work-study fair is held every semester for students who qualify, there is no fair for students who don’t.

“I’m not only frustrated,” Nagy said. “I’m worried that when I’m a junior or senior I won’t be able to afford the history textbooks I really need.”

It appears that the only options left for students like Nagy is to either work double shifts during the summer or purchase fewer textbooks next semester.

Wed Feb 18 , 2009
By Gina Marinelli Three-year-old Chris cries into the grey sleeve of his mother’s sweatshirt. Sheila comforts her son, the younger of her two children, before he jumps off her lap to play with some building blocks. Dressed in a colorful blouse and slacks, Schara Williams sits on the couch across […] 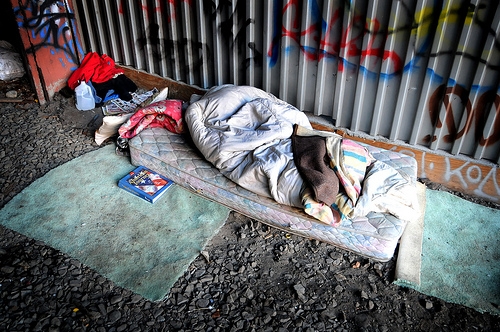