Doug Nash reclines on a giant couch, lumberjack style – bearded and with beer in hand – enjoying some long awaited time off from work. He works as a cameraman for Cablevision in Wappingers Falls, N.Y., as well as behind the counter at Convenient Deli in New Paltz. Many also know him as the guitarist of New Paltz’s metal juggernaut Willbreaker.

He joined Willbreaker during his sophomore year at SUNY New Paltz, along with friend and bassist Bernie Langendorf. As with many musical endeavors, their original intentions were – in this case, fortunately – not reflected in their music.

“We wanted to start an ‘80s metal cover band, but that never panned out,” Nash explained. “A few months later we said, ‘Hey, let’s start a band that sounds like Snapcase.’” He takes a swig from his beer, Brooklyn Brewery Pilsner. “We started the band, but we never ended up sounding like Snapcase. We sounded like Willbreaker.”

Willbreaker hasn’t always been the math-ridden, sludgy beast that it embodies today. From its inception, the band has seen many style changes. Around the year 2000, Willbreaker was a hardcore band, playing shows with the likes of  Massachusetts’ XFilesX. In fact, Willbreaker’s former singer John Lutz put out XFilesX’s first seven-inch record on his label, My Trust Records.

Lutz, however, did not stay long with the current incarnation of the band. As Nash put it, “With John having babies and stuff, he never really had time to give us the full effect.”

Additionally, while Lutz’s violent stage presence was fitting for their previous incarnation as a fast hardcore band, it didn’t fit anymore. “We weren’t really happy with his live performance because he would usually take things out on us instead of the crowd,” Nash said.

“Yeah, [he’d] hit Bernie in the face and break my stuff. He didn’t do it on purpose, but… That’s John Lutz,” Nash added. “But he’s a great guy and I think we’re on good terms now.”

After Lutz left the band, Willbreaker considered changing their name, as it was originally his idea. “We were The Helm for a little bit. We were making up names every day – one of my names that I thought was pretty good was Vessel With Bears On Board,” he explained. “It never stuck for some reason,” he sarcastically added. “Willbreaker is easier and we all liked it.”

Willbreaker’s search for a vocalist encountered many speed bumps. “After John left, we tried out a bunch of different people. We tried out Matt Manhaupt…but that didn’t last long.” Matt Manhaupt currently sings for the Kingston, NY based hardcore band Legacy.

“We tried out another guy, Jesse Madre, but he just didn’t have time for it,” Nash said. “And then Brett sang for us and he’s still doing it.”

That’s Brett Laffin, who previously sang for Cove Road, an experimental hardcore band from Poughkeepsie, NY that broke up earlier in 2008.

Having found a permanent singer, Willbreaker’s sound was solidified. A mix of hardcore, sludge metal (a fusion of doom metal and hardcore punk) and mathcore (technical metalcore), the band’s specific genre is hard to nail down. Nash described Willbreaker in animal form as a “platypus, mixed with a muskrat.”

“Let’s throw a rhino in there, too,” he added, prying open another beer, Sam Adams Cream Stout.

Willbreaker’s lyrics deal with a variety of topics, according to Nash. “Our lyrics have a wide range. They’re about different stuff,” he said. He mentions the song “The New Regime,” whose lyrics are about the Iraq war.

Despite this song’s lyrics, however, the members do not consider Willbreaker a political band, Nash said. “We’re not dumbasses. We don’t have our heads in the dirt and we know what’s going on…. but I don’t consider us a political band,” he explained.

He also brings up the song “Kublai Khan,” which is known by fans for its screaming chant of, “this is my suitcase!” About the song, he said, “[It’s] pretty much the soundtrack to the movie ‘Falling Down,’ the movie with Michael Douglas. It’s about the man getting the man down.”

So what does Doug Nash do when he’s not filming house fires, being convenient or breaking wills? “Watching movies, drinking beer, sleeping and that pretty much sums up my life.”

Separated by the Call of Duty

Thu Feb 26 , 2009
By Hope Still The call of duty leaves many couples grasping to maintain the livelihood of their relationship over hundreds, many times, thousands of miles. Be it due to deployment, training in a far off base, or simply, orders to be stationed across the country or even the world, the […] 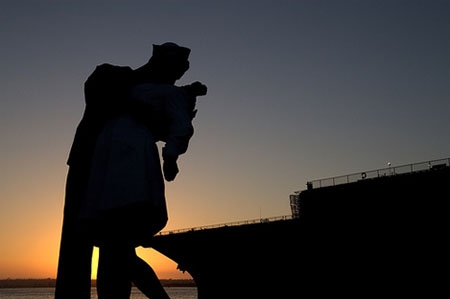