Santa sits with sunglasses on as children get their picture taken on his lap for free. Wood burns in a fire pit a few feet away. Later, there will be a tree lighting ceremony and Christmas carols will be sung by a local singer/songwriter. Parents and children gather with hot apple cider to bear out the frigid night.

This is just one night at Water Street Market, located at the far end of downtown New Paltz, across the street from The Gilded Otter. The market’s assortment of spirited events invite locals to its strip of shops, eateries, art galleries and knick-knack paradises.

The country is officially in a recession, but Water Street Market is staying strong through the tough economic times. Still, business has slowed down for many stores.

“Last year there would be twice as many people shopping here,” said Wasyl Bozydaj, looking out the windows of Black Creek Guitars.

Bozydaj, owner of the guitar shop, opened six years ago after working “corporate” in New York City for around seven years. He grew up locally, so it seemed natural to open shop in New Paltz.

“I’m trying to live the American dream,” said Bozydaj. “Right now it is tough for everyone.”

New Paltz’s Main Street doesn’t suit Bozydaj’s store, because they are noisy neighbors. Sometimes when you are walking through the market you can hear the sound of a guitar echoing out of the store. Opening his store in the slightly more remote Water Street Market just seemed to make sense.

But even with the store’s lively atmosphere, the hard economic times are affecting Bozydaj.

Most items are selling for 20 to 30 percent lower than the typical sale price. Also, lower cost items are moving easier. The typical purchase is under $1,000 now.

Sales are often accompanied by a customer trade-in, to help them get the desired purchase cheaper. This has affected the flow of cash into the store. Many people also seem to be buying on credit cards instead of cash.

Amanda Favoino, owner of Paws of Distinction, has also seen a rise in credit card sales. Tessa, her dog, can often be seen in the store. Favoino wanted to be able to bring her dog to work, so she dropped out of law school. Her store, specializing in homemade dog treats, has been open in Water Street Market for three years.

Overall revenue hasn’t been greatly affected for Favoino, but individual sales have slightly decreased. The dog-friendly environment and foot traffic drove Favoino to Water Street Market, though the foot traffic has recently been diminishing.

With this decrease, some storeowners are finding ways to cope and supplement normal revenue.

To counteract the slowing in-store sales, Bozydaj opened an eBay store. “People shop on eBay,” said Bozydaj. “My own mother doesn’t like to leave the house to shop.”

Most of the clients that come to Black Creek Guitars, however, aren’t too worried about the economy. Many of Bozydaj’s clients are wealthy, and he said that some even feel guilty about their purchases. Some customers can spend thousands of dollars and not have to worry.

While customers of The Antiques Barn tend not to be big spenders, owner Walter Marquez relies on his wide range of customers.

After the previous owner left four years ago, Marquez has been running the store and said he his having one of the best years ever, despite the economy. The store usually has someone browsing through antiques at any given time and the many regular customers have kept Marquez afloat.

Maglyn’s Dream, another store in the market, also has its regular customers. Owners Maggie Havens and Lynn Oldmixon support around 25 local artisans through their store.

“We developed a local following the last couple of years,” said Havens. “It is an awesome feeling to know you are sought after.”

Maglyn’s Dream has been in Water Street Market for over six years. They have changed locations within the market four times to accommodate their growing business.

“You really do need a little more than the bare necessities. We try to sell something intangible.”
~ Steve Jordan

If they were going to feel the pinch, Havens didn’t believe it would be until the summer. She mentioned that many customers aren’t buying items for themselves, but rather as gifts for others.

Marquez believes the higher cost stores are being affected more. He is seeing most sales at The Antique Barn range from $20-to-$30, instead of selling higher cost items. He credits the location for his success.

“We are lucky here in New Paltz and we know that,” said Marquez.

Steve Jordan, owner of a photography store under his name, also thanks location for his success. He has been involved in photography for over 20 years and has been in Water Street Market for five years.

“We are doing well because we are close enough to the metropolitan area,” said Jordan. “People love this area.”

Many customers to Water Street Market are tourists or people who live around New York City and make regular trips to the area. Jordan says the fair prices he can offer for his photography are a strong selling point, as many people from the metropolitan area are used to paying higher prices.

Even in tough economic times, Jordan feels people need more than food, clothing and shelter. Many people will purchase his photos for fond memories they have of the area.

“You really do need a little more than the bare necessities,” said Jordan. “We try to sell something intangible.”

The uncertain economic times have been difficult for many people, but these storeowners have found ways to overcome these hard times. Overall, the Water Street Market seems to be able to shine through these adversities.

“It is a very strange time,” said Bozydaj. “I have not seen anything like it.”

Tue Mar 10 , 2009
In the midst of what many call an energy crisis- rising fuel prices, global warming and an overreliance of foreign oil sources- many people all over the United States are taking measures to use less energy or find ways to produce more energy. Supporters of alternative energy, which refers to […] 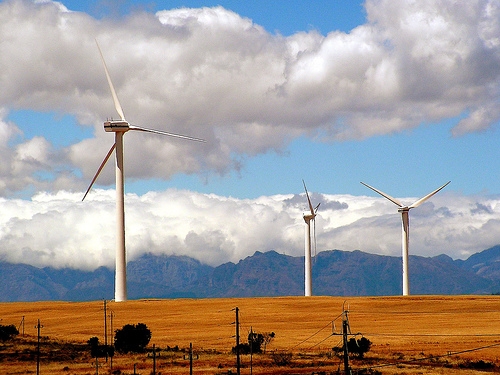